As the daughter of a mother who worked overseas, I always looked forward to receiving pasalubong from Mama when we were kids. It came every few months in the form of balikbayan (return [to] country) boxes filled with chocolates, canned goods, toiletries, cosmetics, clothes, shoes and anything else that couldn’t be bought or found in the Philippines. These handpicked items were carefully packed by my mother, sent in the hopes of filling the void left by a parent abroad.

The Filipino word ‘pasalubong’ has its roots in the word salubong , which means ‘meet’ or ‘welcome’. When prefixed by pa , the act of salubong turns into an object relating to it – ‘to meet’, ‘to welcome’. Pasalubong, therefore, is a souvenir – a gift given to someone. 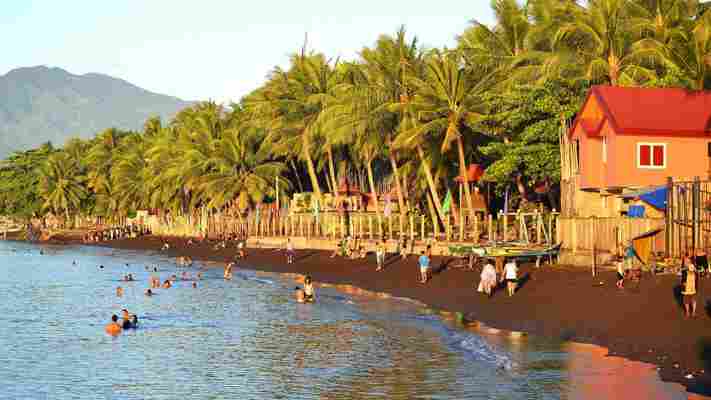 Pasalubong is more than just a souvenir; it reinforces friendship and community ties by sharing good fortune (Credit: Paul Fearn/Alamy)

The precise beginnings of the pasalubong ritual are difficult to identify. Dr Nestor Castro, anthropology professor at the University of the Philippines, believes pasalubong is a pre-Hispanic practice, given that the term is indigenous to the Filipino language and that early Philippine communities engaged in long-distance trade.

The word ‘pasalubong’ has its roots in the word salubong, which means ‘meet’ or ‘welcome’

Fellow anthropology professor at the University of the Philippines, Dr Michael Tan, agrees, writing, “…I suspect it referred to a time when travel was difficult, making the return more emotion-laden. The more distant and the more difficult the place one went to, as in the case of many of our overseas Filipinos, the more important it was to bring back something.”

But pasalubong is more than simply a souvenir or gift, with layers of meaning and ritual lying behind the word. 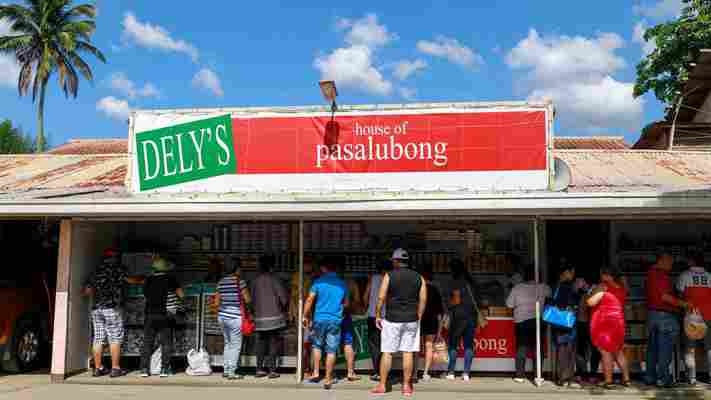 ‘Pasalubong’ has its roots in the word ‘salubong’, which means ‘meet’ or ‘welcome’ (Credit: Yooran Park/Alamy)

“Pasalubong is based on the principle of reciprocity – favour doing or gift giving,” explained Dr Mary Racelis, research scientist at the Institute of Philippine Culture and professorial lecturer at the Department of Sociology and Anthropology at the Ateneo de Manila University. She explained that bringing back pasalubong for those left behind fulfils certain cultural concerns: reinforcing a friendship, honouring the recipient, sharing one’s good fortune of being able to travel outside the community and promoting the idea that you were thinking of the recipient while you were away.

Pasalubong is based on the principle of reciprocity

And pasalubong is not limited to items brought home by foreign workers. It can be as simple as a box of doughnuts from parents after work, or regional delicacies from places you’ve travelled to. Pasalubong can be typical of the place where one is coming from, or items that the recipient couldn’t normally afford.

Whenever I travel, I always think about the pasalubong I can bring back home. I look for items that are inextricably linked to places I’ve been – peanut kisses from the central Philippines’ Bohol province; ube hopia (moon cake-like pastries filled with purple yam) from Puerto Princesa in Palawan; durian candies from the southern Philippines’ Davao region; a batik sarong from Bali; Petronas Twin Towers shirts from Malaysia; Tim Tam biscuits from Australia; Choco-ade cookies from New Zealand.

Local treats like sapin-sapin, espasol and bagnet are brought back from trips around the Philippines (Credit: Paul Fearn/Alamy)

But pasalubong extends beyond Filipinos, with many foreigners adopting the custom when they hear about it. I’ve had co-workers from other countries bring pasalubong such as nougat and macarons from France and chocolates from Australia. As a gesture of goodwill, we make sure they take home Filipino trinkets like a small wooden carabao (Philippine water buffalo), capiz shell coasters or a tiny replica of a jeepney (a Philippine public transport vehicle that evolved from the American Jeep). When visiting their offices abroad, we come bearing dried mangoes, a favourite Filipino pasalubong.

This implicit recognition of reciprocity – that the person who receives pasalubong is expected to give pasalubong in return – is an essential part of the ritual. Expressions of appreciation and reassurances of joy for the person returning home are also expected.

Overseas Filipino workers, or OFWs, carry the heaviest pasalubong expectations. “Since they have gone abroad and ostensibly made a lot of money, pasalubong is a form of sharing their wealth,” Dr Racelis explained. “Pasalubong for the immediate family is seen as partly compensating for their having been away from the family for some time, and having deprived the latter of the worker’s presence.”

The rise in the number of Filipinos working in other countries, with Saudi Arabia, the United Arab Emirates and Kuwait having the biggest diaspora, has led to the balikbayan box phenomenon. “The balikbayan box was a creative response by shippers who recognized that many OFWs were sending large amounts of items home,” Dr Racelis said. “They recognised the market demand and responded to it by designing and selling easy-to-assemble, sturdy and stackable boxes of the right size for airline shipping.”

The balikbayan box has become a receptacle for pasalubong even if the person has not yet returned.

“When one person goes to a distant land, they return carrying pasalubong with them. But in the case of the balikbayan box, it is sent to relatives and friends even if the person who sent it has not yet returned home,” Dr Castro said.

Overseas Filipino workers carry the heaviest pasalubong expectations having to compensate for their time away (Credit: Paul Fearn/Alamy)

With the convenience provided by the balikbayan box and the prevalence of travel, has the pasalubong started to lose its meaning?

“Because many goods are now easily available, certain types of pasalubong no longer have strong significance,” Dr Castro said.

Dr Tan writes , “When you travel a lot, as I used to, the pasalubong can become more of a tedious obligation rather than an act of generosity and joy. Because we feel obligated to bring something for everyone, we pick up whatever we can just to give something.”

Dr Racelis meanwhile notes the resentment felt by many OFWs at what appears to be excessive expectations from prospective recipients. She says that during their first trip home, OFWs are happy to share the benefits of working abroad and exemplifying their success by bringing extensive pasalubong. However, when this cuts down on their savings, the happy feeling may decline each time they return.

Despite all this, pasalubong remains a steadfast trait within Philippine culture. “Pasalubong continues to fulfil the function of reintegrating travellers back to the community and reinforcing familial ties and friendships,” Dr Racelis said.

“We should not underestimate the resiliency of culture,” Dr Castro added. “The longing for pasalubong connects Filipinos to their notion of home and heritage.”