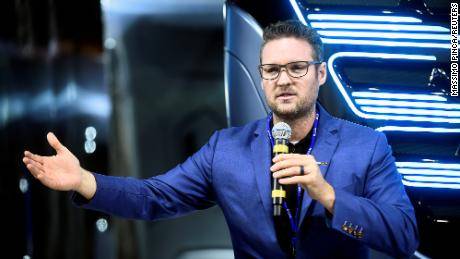 New York (CNN Business) A truck with the doors duct-taped on. Ford pickups masquerading as something else. The head of a company running to google whether or not the thing he had just promised inventors was even physically possible. These are some of the wildest allegations from charging documents filed this morning against Trevor Milton , the founder and former chairman of electric-and-hydrogen vehicle company Nikola. The US Attorney's office for the Southern District of New York alleges that Milton deceived investors about the nature and progress of Nikola. Milton's legal team, in response, released a statement saying he is "innocent" of the allegations and that "justice was not served by the government's action today, but it will be when Mr. Milton is exonerated."

Before Milton's resignation in September 2020, investors jumped on Nikola in the hopes that it could be a new Tesla. Valued as much as $26 billion after it initially went public, while its revenue was less than $100,000, it even had a partnership with venerable automaker GM (which GM later pulled out of). But allegations of impropriety began to mount, especially from research firm and shortseller Hindenburg Research, which kick-started Milton's problems by questioning a video Nikola had released that was supposedly of its "fully functioning" prototype truck but turned out to have been a non-functional truck rolled down a hill. Milton quit and the investigations started to pile up.

Below, some of the more eye-popping allegations from the indictment.

The company's prototype for its hydrogen truck, the NIkola One, allegedly did not work at all, but rather had to be rolled down a hill, and the door had to be held on with tape:

"In or about 2017, a representative of a large multinational corporation approached Nikola and asked to use the Nikola One in a commercial celebrating innovation. The concept for the video included a shot of the Nikola One coming to a stop in front of a stop sign. In order to accomplish this feat with a vehicle that could not drive, the Nikola One was towed to the top of hill, at which point the 'driver' released the brakes, and the truck rolled down the hill until being brought to a stop in front of the stop sign. For additional takes, the truck was towed to the top of the hill and rolled down the hill twice more. Additionally, the Nikola One's door, which had been constructed using minivan parts, had to be taped up during the shoot to prevent it from falling off."