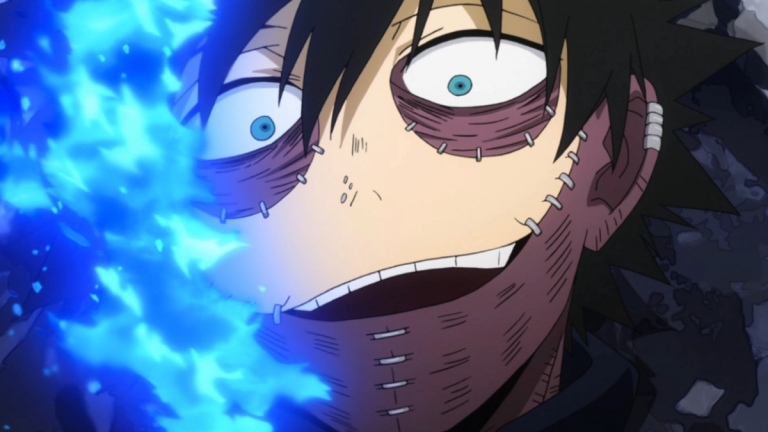 My Hero Academia’s latest season has just ended, but here’s a primer on a certain villain that’s primed to play a huge role in season 5.

The following contains spoilers for the MY HERO ACADEMIA season finale, and the manga.

My Hero Academia does not have a villain problem. The anime’s focus is absolutely the heroes of its universe, but as these fledgling do-gooders grow stronger and learn more about themselves, the series has steadily introduced several organizations of powerful villains that easily rival the most prolific heroes.

There have been strong villains on My Hero Academia right from the start, but antagonists like All For One and this season’s more recent foe, Overhaul, have been intimidating in frightening new ways. As the characters within the show grow and mature the villains launch attacks that become increasingly personal and show no remorse. It will be difficult to top Overhaul’s twisted methods, but the end of My Hero Academia season 4 offers up some hints towards who’s set to be a major threat next season.

The penultimate episode of this season shows that dabi is the one that sends out the bio-engineered Nomu that wages war against Endeavor, but even before that he’s also part of Shigaraki’s squad of villains that hijack Chisaki and effectively eliminate him from ever being a threat again in the future. These are major events that both go unresolved as the fourth season of My Hero Academia comes to an end, and before this point it’s been a while since Dabi has made a major appearance. With it clear that Dabi will play a large role in the next season of My Hero Academia, there’s never been a more appropriate time to revisit just who this enigmatic villain is.

Dabi’s first appearance happens during the end of My Hero Academia season 2 as one of the potential recruits for the League of Villains who’s inspired by the acts of the Hero Killer “Stain.” However, it’s not until the third season episode “My Hero,” where Dabi really comes into play. U.A. High students are going through a training boot camp in the forest when Dabi attacks with the Vanguard Action Squad of the League of Villains. Dabi impressively holds his own against Aizawa and he’s instrumental in the kidnapping of Bakugo.

CULTUREThe Best Anime to Stream and Where to Find Them

Dabi reveals during his first encounter with Shigaraki that “Dabi” is not his real name, but what he’s currently operating under. He’s a more stoic individual, but he houses a seething rage deep inside. Dabi’s body is also covered in a series of scars, which is likely because of the extreme temperature of his quirk. Both Endeavor and Shoto have shown pain over their attempts to attain higher levels of power in their fire Quirks and so it seems like Dabi’s body has paid the price for this power.

What Is Dabi’s Quirk?

Dabi is a character who wields a fire-related Quirk, often referred to as “Cremation,” that’s a particularly intense burst of flames. Dabi isn’t the only character to utilize a fire Quirk, but Dabi produces blue flames, which indicates a much greater level of power and temperature. Dabi can incinerate anything that he touches, but he often uses this skill to overwhelm an entire area. In his first major appearance, he touches one tree and is able to turn the entire forest into an inferno. He’s pulled the same trick on other villains, too. Dabi’s extremely efficient in long-ranged combat, but because of the intensity of his heat he has to make his fights brief.

What Is Dabi Planning?

Dabi is consistently shown to have aspirations for the League of Villains and what the organization can accomplish. Dabi, along with Himiko Toga, are the original recruits for the Vanguard Action Squad and along with Mr. Compress and Twice they’re easily the strongest. After the fall of All For One, Dabi had attempts to rebuild a stronger version of the League of Villains, but no one was able to meet his high expectations. Much like with Stain, Dabi seems content to simply spread chaos and destroy the heroes’ image of peace that they’ve worked hard to cultivate. This extends to his latest act, to target Endeavor in the very public display in the show’s season finale. Dabi’s stunt is a failure, so it’s likely that he’s going to strike back even harder at Endeavor in what’s to come.

How Is Dabi Connected To Endeavor?

There’s a popular theory that Dabi is actually the estranged elder sibling of the Todoroki family, Toya, which would make him not only Endeavor’s son, but also Shoto’s brother. This honestly makes for fantastic material to explore as no heroes have been related to a villain in this capacity before. It’d make for a strong way to unite Endeavor and Shoto, too. The series has been clear that Endeavor was neglectful to his family and it’s not hard to picture Dabi taking things especially hard and getting swept in by the persuasive League of Villains. However, the biggest tell here is that Dabi’s Quirk is fire-related, much like Endeavor and some of the members of the Todoroki family. Dabi specifically wields blue flames as well, which appears to be something reserved for Endeavor.

The full scope of Dabi’s scheme and just how prominent he’ll be in the fifth season of the anime remains up to speculation, but he should make for a compelling villain as he finally gets to move into the spotlight.