When Davis Stalts spoke of his seafaring grandfather, it was with the reverence accorded to a mythical hero. "He had hands this big," he gestured, capping off a large space with his palms. "He said he was made of steel." 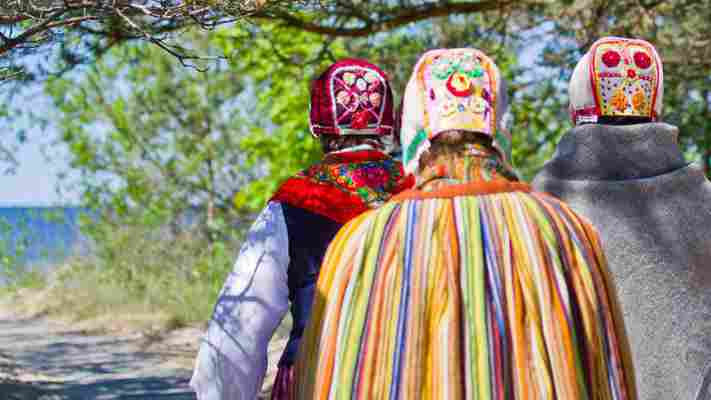 We were sitting in Hāgenskalna Komūna, a now-closed bar and cultural centre that Stalts set up in Riga, the Latvian capital. Hidden away in a dimly lit neighbourhood on the left bank of the Daugava river, it was a world away from the brash sports bars and stag-party haunts of Riga's old town.

The grey-eyed, barrel-chested Stalts was a man of imposing build himself, so it was not hard to imagine the impressionable young boy being awed by his grandfather – a giant sea captain who had endured more than his fair share of hardship. Then there were his tales, thrilling accounts of adventure at sea that captivated the young Stalts. But the old captain seldom spoke in Latvian to his grandson: he would relate his stories in a language full of extended vowels, dipthongs and tripthongs. 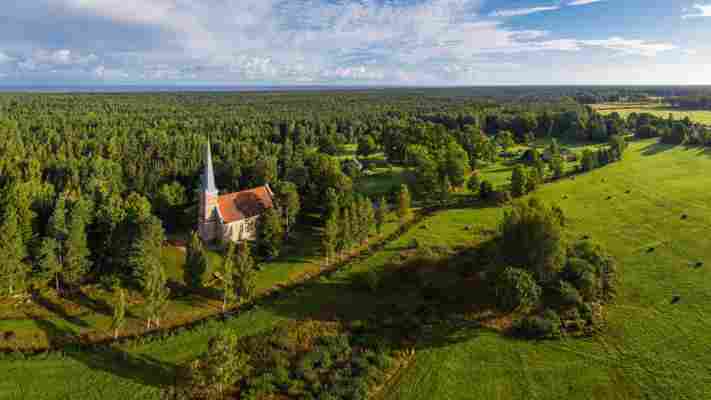 Mazirbe is one of 12 villages historically inhabited by Livonians (Credit: Imantsu/Getty Images)

It was only when Stalts reached the age of nine or 10 that he started to understand that aside from a few relatives, nobody else around him spoke like this. "I remember thinking, what's going on? Why does nobody speak this language? Only some very old people."

In fact, Stalts' grandfather was one of the last native speakers of Livonian, a language now considered by linguists to be on the verge of extinction. Unlike Latvian, which is an Indo-European language from the Baltic group, Livonian belongs to the group of Finno-Ugric tongues, most of which are spoken by ethnic minorities in modern-day Russia. Like its cousins Finnish and Estonian, it has a complex grammar: there are 17 cases; nouns have no gender; and there is no future tense.

You may also be interested in: • The French republic no one knows • Europe's nation of introverts • A seafaring people with five genders

Today's Livonian population is estimated at just around 200, making them Europe's smallest ethnic minority. But it wasn't always this way. For centuries this Finno-Ugric race of fishermen thrived on Latvia's remote western shores, with as many as 30,000 people speaking the language in medieval times. The Livonians carefully preserved their distinct heritage as the region passed from German to Russian hands, and eventually, in the early 20th Century, became part of an independent Latvian republic.

But the war years and subsequent decades of Soviet occupation brought harsh repressions, executions and deportations for Latvians and Livonians alike – for Stalin, anyone with a strong sense of national identity was a threat. The fate of Stalts' family is testament to the harrowing ordeal that unfolded for many Livonians when the Soviets swept into the Baltic states as the Nazis retreated in 1944.

Realising that the arrival of the Red Army heralded a fresh occupation, his grandfather's brother fled from his native village of Kolka by boat to Sweden along with many other Livonians. His sister was arrested and sentenced to 25 years in Siberia, returning only in the mid-1950s after Stalin's death. Her husband, a local policeman, was shot.

What was once a thriving culture with a distinct heritage has dwindled to a population of 200 (Credit: Aldis Pinkens)

By the time Latvia regained independence in 1991, the Livonian community was fragmented, and extensive intermarriage with Latvians had seen the use of the language dwindle. Grizelda Kristiņa, the last true native speaker of Livonian, died in 2013, leaving just a handful of Livonians who were able to communicate in the language. Their parents had been too afraid of Soviet reprisals to speak to their children in Livonian.

"That's why our native language is almost extinct," sighed Stalts. "Only 50 years did it. The Soviet Union did what 700 years of German times couldn't. It's difficult, very difficult for my nation."

He showed me a book of black-and-white photographs taken by Japanese photographer Yuki Nakamura in the 2000s: women posing beside smokehouses made from old boats; sturdy men in shirts and jackets mending fishing nets or standing in doorways, gazing into the lens with a formal dignity.

Did the Livonians still have a future to look forward to, I wondered, or had history already passed its verdict on this proud fishing race and their heritage? To find out more, I headed to the Livonians' ancestral homeland on the wild, remote shores of western Latvia.

Beyond Riga, the forest closed in. The bus to Kolka followed empty roads through an autumnal landscape of aching melancholy, the last whispers of golden birch leaves just visible amid the muted greens and browns of spruce, pine and fir. Here and there, remote farmsteads crouched beneath thick walls of forest: small clusters of stone barns, log houses and fences that were quickly swallowed up again by the trees.

Livonian belongs to the group of Finno-Ugric tongues, most of which are spoken by ethnic minorities in modern-day Russia

It was dark by the time the bus reached Kolka and just one other passenger remained. The scent of pine resin hung in the damp salty air as I followed the road into the gloom, the lapping of waves audible in the distance.

Dženeta Marinska, who ran the guesthouse where I was staying, had prepared a traditional Livonian treat for me as a welcome gift: potato and carrot pies in rye pastry. Called sūrkakūd , these are a legacy of the Livonians' ethnic origins: similar pies are also eaten in the Finno-Ugric cultures of Finland and, just across the Russian border, in Karelia.

When I asked whether she would describe herself as Livonian, Marinska laughed: "I am… also Livonian. I grew up in a Latvian atmosphere, but of course I learnt from my parents and grandparents in my childhood that there was a connection with Livonians."

Unlike Stalts, Marinska never knew her Livonian grandfather: he died before she was born. Her grandmother was Latvian, and her mother never learnt the language. Marinska does, however, remember her great-aunt speaking Livonian to a visiting cousin. "I was a little child that time and I heard this language that was not Latvian. It was strange for me, and I always remember that. It connected me with my roots."

Long-abandoned boats in the forest outside Mazirbe tell the story of Livonian culture under Soviet occupation (Credit: Imantsu/Getty Images)

The next day I borrowed a bicycle from Marinska and set off down the coast from Kolka Cape, a sandy headland that marks the boundary between the Gulf of Riga to the east and the open Baltic to the west. Historically, the Livonians inhabited a string of 12 villages stretching 40km south of Kolka. Once bustling with life, today these rustic groups of wooden farmhouses, paddocks and log barns are home to just a handful of ageing residents.

Just outside the village of Mazirbe – historically the heart of Livonian culture – a path led me through the coastal dunes and into the forest beyond, meandering through spruce, pine and alder as the boom of the Baltic subsided into a murmur. After a few hundred metres, ghostly forms began to emerge from the trees – a hull here, a broken bow there, the outline of a rowing boat dissolving among blueberry and moss. Here, in the forest, an entire small fishing fleet was rotting away.

According to Teiksma Pobuse, the Latvian caretaker at Mazirbe's community centre, this boat cemetery is a poignant symbol of the catastrophe that overtook the Livonian community during Soviet occupation. The new communist authorities banned commercial fishing, leaving local fishermen with a harsh choice between joining a state co-operative or finding work elsewhere.

"In ancient times, Livonians would burn old boats by the sea," she said. "But in Soviet times it was forbidden to go out onto the beach because it was a border zone. So, what did people do? They left their old boats in the forest."

Fearful of repression and preferring the opportunities on offer in the towns and cities to collective farm work, the Livonian fishermen began to drift away from their villages in search of new livelihoods, beginning a slow dispersal that proved almost fatal.

Before I left, Pobuse pointed out the Livonian flag fluttering from the building, with its horizontal bands of green, white and blue – an abstract depiction of the Livonian coast: "Livonians were fishermen, and what did a fisherman see when he went to sea? Green forest, white sand and the blue water."

Mazirbe's living ties to the culture may be fading, but as Kolka's shiny new EU-funded Livonian cultural centre shows, there is hope on the horizon, despite the tiny community's tragic past.

In fact, there has been a revival of interest in Livonian culture in recent years, aided by the creation of programmes and language courses funded by the Latvian state and various foreign NGOs. Aware that time is running short, many Livonians are reconnecting with their linguistic heritage in an attempt to prevent it from being lost forever. And a couple of families are making the effort to bring up their children immersed in their ancestral language, ensuring that several members of the next generation grow up as something close to native speakers.

Marinska told me that she chose to study Livonian because she felt it was an important part of her identity. "Because I heard this language as a little child, it's in my memory or in my brain," she said. "It makes me happy or proud I can understand when somebody speaks. When we sing together it's the most emotional feeling."

Since fewer than 30 of today's Livonians are able to converse in their native tongue, music has become an important way of connecting to their ancestral heritage. Several folk groups and vocal ensembles perform old songs celebrating the traditional Livonian way of life.

Stalts and his girlfriend Monta Kvjatkovska, who is also Livonian, are attempting to get the younger generation involved, too. The couple have formed NeiUm , which he describes as a more "avant-garde" project: "We sing in Livonian, mixed with some electronic music with ethnic vibes."

Kvjatkovska, meanwhile, organises the biannual Livonian Song Festival in Riga, featuring a variety of traditional and contemporary Livonian acts. Stalts says it is important "to make something new, to get our nation to the next stage, to stay alive."

How does Stalts feel about the future of the Livonian community? "I don't know about the community," he said, "but I feel optimistic about Livonians. I think more and more people will find their Livonian roots and will understand that this culture is important to them."

Perhaps, little by little, the Livonian community is laying the foundations that will secure its survival.

Back at Hāgenskalna Komūna in Riga, NeiUm was preparing to perform a traditional Livonian song as part of a special evening to mark Velu Laiks, the "time of the souls", an autumn period during which Latvians and Livonians traditionally hold ritual celebrations to communicate with the dead.

Kvjatkovska stepped forward and took her place alongside Stalts, and the room was plunged into a hushed darkness. Surrounded by flickering candles, they began their song. In slow, mellifluous couplets, they recited a solemn entreaty to a Livonian goddess to protect the spirits of their ancestors.

As I listened, picturing the men and women whose lives on the Livonian coast once played out to the rhythms of this language, the scattered candles wavered, but continued to burn. And the song went on.

Our Unique World is a BBC Travel series that celebrates what makes us different and distinctive by exploring offbeat subcultures and obscure communities around the globe.