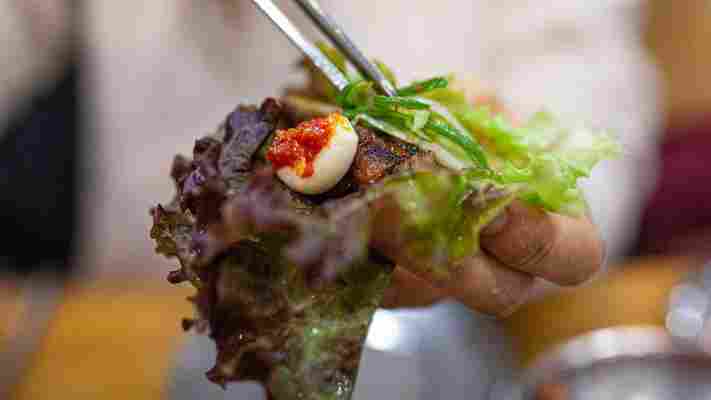 What's the most authentic Korean barbecue you've ever had? Weigh in and join the discussion on Facebook .

It was Tuesday at lunchtime at Joseonok , a Korean barbecue restaurant in downtown Seoul’s Euljiro neighbourhood that serves galbi – marinated beef short ribs grilled over smoking coals. Through an open window into the kitchen, I could see flames leaping off the grill as strips of meat were laid on, the marinade sizzling violently and unleashing aromas that tormented my grumbling stomach. I realised that in 11 years of visiting Seoul, I had never seen a Korean barbecue restaurant this busy at lunchtime.

Waitresses in jet-black aprons flitted back and forth from the kitchen carrying steaming-hot trays past framed scrolls of Korean calligraphy to tables full of locals-only diners. Once tableside, the servers cut the meat into bite-sized pieces using kitchen scissors, leaving some attached to the bones with chewy connective tissue. The challenge, so I’d been told, is to hold the bones with your chopsticks and pick them clean using only your teeth. 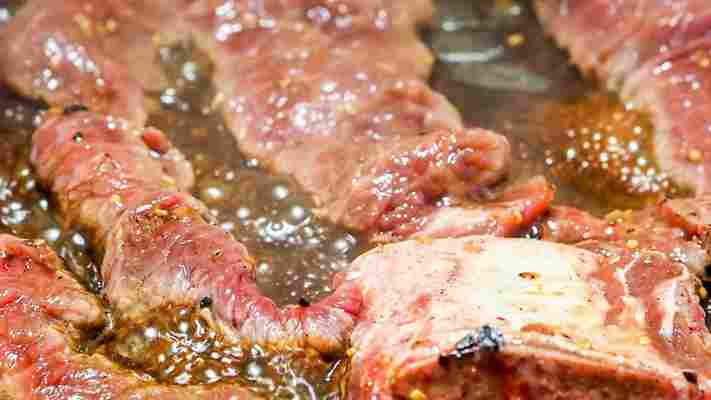 As I bit in, the meat’s smoky, flame-grilled sear filled my mouth, before being quickly followed by a rich sweetness from the marinade. Each piece of the galbi seemed to have a slightly different texture: some were meltingly tender while others required more jaw work. Whether the meat was eaten alone or paired with any one of the vegetable side dishes on the table, the flavours were bold, memorable and mouth-wateringly delicious.

Today, the sprawling, neon-lit megacity of Seoul has hundreds of Korean barbecue restaurants, and Joseonok is by no means the most famous or trendy of them. For the best modern, grilled-at-the-table take on Korean barbecue, many locals head south of the Han River to Saebyukjib (“House of Dawn”) in Seoul’s Gangnam District. As its name implies, the buzzing restaurant is open 24/7 and is famous for serving high-quality hanwoo – beef from a Korean cattle breed that’s akin to Japan’s famed wagyu breed for its richly marbled cuts and high prices. And for samgyeopsal (pork belly, or literally “three-layer meat”), one of the most popular types of barbecue in Korea, there is Palsaik Samgyeopsal , which is known for its eight different marinade ingredients, including ginseng, pine leaves and wine.

Yet, many Seoulites believe that Joseonok is the epitome of what Korean barbecue should be. The restaurant opened in 1937, making it one of the city’s oldest restaurants still in operation. Newspaper clippings and black-and-white photographs from the eatery’s 83 years of existence line the walls, but it’s not just the palpable sense of history that makes Joseonok unique. Whereas most Korean barbecue restaurants place a grill in the middle of each table and let diners cook their own meat, Joseonok has shunned this relatively recent trend and stuck to the traditional way of serving galbi: having just one chef in the kitchen who cooks for everyone. This means a smoke-free dining room, a consistent level of doneness (lightly seared on the outside and pink but juicy on the inside) and an intense depth of smoky umami flavour from a well-seasoned grill. 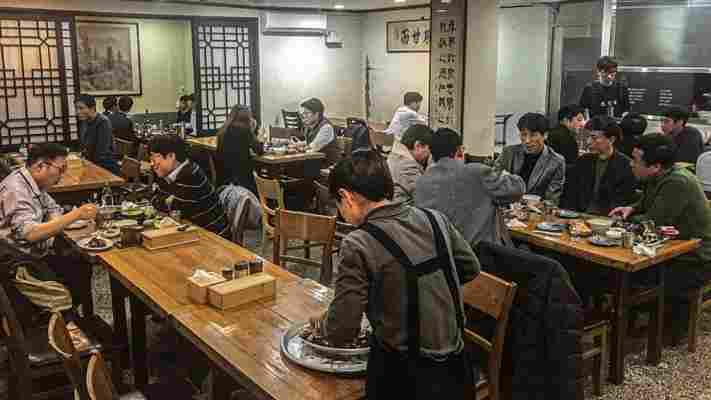 Opened in 1937, Joseonok is one of Seoul's oldest restaurants – and the epitome of what Korean barbecue should be (Credit: Ben McKechnie)

Manning the kitchen is 80-year-old chef Park Jung-gyu, who has worked at the restaurant since 1960. “The recipe for our galbi marinade has not changed in 80 years,” Park told me as two waitresses laden with trays darted past us. “Actually, that’s not entirely true,” he corrected himself. “As Koreans have become more concerned with healthy eating over the decades, we’ve tweaked it to have less sugar.”

Park’s heavenly marinade has just four ingredients: soy sauce, sesame oil, garlic and sugar. Park buys a large cow's rib cage and arrives at the restaurant each day at 08:30 to butcher it into individual cuts from which the barbecued meat and the menu’s three soups are created. The meat is always fresh, never frozen, and the ribs are marinated for two to three days before being barbecued over flaming coals. “The key to great galbi is to keep smothering it in marinade when it’s on the grill,” Park said.

Chef Park Jung-gyu is 80 years old and has worked at Joseonok for the last 60 years (Credit: Ben McKechnie)

Korean barbecue is an umbrella term used by English speakers for a whole host of grilled meat cuts. These are usually pork or beef, although I once had ostrich at a Korean barbecue restaurant deep in the countryside of Gyeonggi-do, the province that hugs Seoul like a backwards letter C. The two most common types of beef barbecue are galbi (literally: “rib”) and bulgogi (thin slices of sirloin or rib-eye). Whereas galbi is often marinated and cooked on a coal-fired grill, bulgogi is generally heated on a butane grill and has become one of Korea’s most popular home-cooked dishes.

You may also be interested in: • Is this the world's freshest seafood? • Does this schnitzel define Vienna? • Is this Spain's most authentic paella?

According to Kim Jin-young, Joseonok’s third-generation owner and manager, the first barbecue restaurants in Seoul were established during the Joseon dynasty that ruled the Korean peninsula from 1392 until 1910 and located in a neighbourhood near the royal palaces of Gyeongbokgung and Changdeokgung. “They were so popular that people who lived inside the palace grounds would leave and come to eat in them,” said Kim. Galbi and bulgogi evolved from the same ancestor, maekjeok , a simple dish of marinated beef grilled on skewers dating back almost 2,000 years. Galbi remains more reminiscent of maekjeok, and as such can be considered closer to the original Korean barbecue.

Despite galbi’s royal roots, Joseonok was one of the first restaurants in Korea to popularise the dish for the masses. When Korea was under Japanese colonial rule from 1910 to 1945, meat shortages were very common for all but the ruling Japanese elite. Joseonok was founded by Kim’s grandmother as a place run by Koreans for Koreans at a time when very few Korean-run restaurants existed in Seoul.

Joseonok is located in Seoul’s Euljiro neighbourhood and has been open since Japan ruled Korea (Credit: Ben McKechnie)

Joseonok was initially a drinking establishment that also served food and, according to Park, it employed females to serve drinks to a mostly older, male clientele. Later, as meat production became more commercialised in the 1940s, the popularity of galbi skyrocketed in Seoul and Kim’s grandmother decided that the restaurant should only serve beef short ribs. Many decades later, Joseonok’s menu is still small: it only serves beef ribs, three soups and naengmyeon , a cold noodle dish originating in Pyongyang, North Korea, that many diners order to finish their meals.

According to Kim and Park, it’s this meticulous adherence to tradition that keeps their devoted local fanbase coming back. “Our older customers tell us that eating our galbi reminds them of the food they used to eat in their childhood,” Park said. “It transports them back in time.”

The next evening, I returned with an empty stomach for dinner. As the tantalising waft of freshly barbecued galbi floated out from the kitchen, a waitress arranged a series of shiny metal bowls on my table, which contained the banchan (side dishes) that no Korean barbecue meal would be complete without. While the banchan at many galbi restaurants in Seoul change based on the season or what the chef can find at the market, at Joseonok, they have not changed since Kim’s grandmother worked there.

Unlike other Seoul galbi restaurants, the side dishes served at Joseonok have not changed in generations (Credit: Ben McKechnie)

The first one I tried was kimchi, Korea’s ubiquitous and spicy fermented cabbage dish and one of the country’s most famous culinary exports. I used flat metal chopsticks to pick up and taste a piece; it was crisp, sour and packed a spicy kick.

The second and third banchan were two other varieties of kimchi: one was long, spaghetti-like strips of mu (white radish) in a lightly spiced dressing; and the other was doraji (a Korean bellflower). The other five plates and dishes (banchan are numerous and refilled for free) contained shredded spring onions in vinegar and chilli; white radish floating in a cold vinegar-based broth; raw garlic cloves; lettuce leaves to wrap the meat; and whole green chillies for the brave. Finally, there was the king of Korean condiments: ssamjang , an exquisite savoury dipping sauce based on red chilli and fermented soybean paste with an intense umami flavour.

Somehow the galbi tasted even better during my second visit. Each of the layers of flavour seemed intensified – smokier, sweeter, juicier – but it could just be that I had been salivating over the short ribs since the previous day. Perhaps this hankering is what’s kept Joseonok’s regulars returning for so many decades.

Before I left the restaurant, I bid Park farewell and asked him lightheartedly whether there were any retirement plans on the horizon. The old master chuckled. “I believe the fastest way to lose my good health would be to stop working and sit around at home with nothing to do.” He looked through the dining room and into the kitchen where he has worked all these years. “This place really is my life,” he said.

Quintessential City is a BBC Travel series that examines some of the world’s greatest cultural experiences, and then offers our take on the single-most memorable and true-to-the-local-spirit one you can have.