I’m a quarter Welsh. My darling grandmother grew up in the Rhondda Valley, a small mining town where her father was the school principal. She didn’t speak a lot of Welsh, other than to delight us by reciting the longest train station name in the world (Llanfairpwllgwyngyllgogerychwyrndrobwllllantysiliogogogoch). I was always aware, though, of the word ‘ cwtch’ . She didn’t use it often, but I knew it was special; it was almost said in a whisper. I remember her using it once in hospital, when we first thought she was dying. It’s a special sort of cuddle, she said. And that it is: a ‘cwtch’ (pronounced ‘kutch’, to rhyme with ‘butch’) is the Welsh word for a cuddle or hug, but it’s also so much more than that.

Its second meaning is a cubbyhole or cupboard; a small space in which to store things safely. Blend those two meanings and you get a better idea of what the word means: it’s the wrapping of your arms around someone to make them feel safe in the world. It’s precisely what my grandmother needed, and gave, as she started to see her life slip away from her. I remember nuzzling into her neck, smelling the Youth Dew perfume she wore on her papery skin, and feeling like there was no safer space in the world. That is exactly how a cwtch ought to make you feel: safe, warm, comforted. 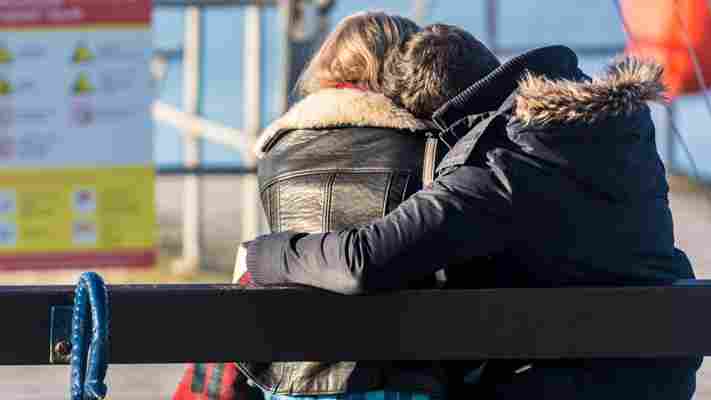 ‘Cwtch’ is the Welsh word for a hug, but it’s also so much more than that (Credit: Veteran Photography/Alamy)

You may also be interested in: • Where being nice is the law • Why Poland will never have hygge • The Greek word that can’t be translated

It’s an emotionally significant embrace and an intrinsically Welsh word that evokes a sense of home. My grandmother was some 17,000km from her Welsh home when she died in her sunburnt adopted home of Sydney, Australia. It is of little surprise to me that she would use that word then, wanting, probably, to transport herself back to where she grew up. It’s in times of fear, danger, distress and melancholy that we most need a cwtch. It’s not a casual gesture of affection; it’s a profound one, and it was invented by the Welsh.

Hugs are for everyone; cwtches are only for a few

“It’s not just a cuddle or a hug – it’s something special and something I wouldn’t do with everyone,” said Amy Jones, a Welsh Londoner whose mother comes from Cardiff and father from the Valleys. “A cwtch is what my parents would give me when I was young and had fallen over, it’s something my husband and I do on the sofa when we’re in a blissful cocoon, it’s what I give my friends when they’re stressed or sad. A cwtch is something you do when you’re overflowing with joy and love at another person’s sheer existence in your life that you can’t help but try and squeeze that love into them; it’s a safe space of love and comfort for someone who needs it; it’s all the best parts of being alive and loving someone, in a pair of arms. Hugs are for everyone; cwtches are only for a few, very special people in my life.”

Despite not being Welsh themselves, Jones’ husband and friends know the word and they’re well aware how much it means to Jones – both as code for ‘I need emotional support’ and as a motif of her Welsh identity. Like my grandma, Jones uses the word to take herself back to her roots. “I haven’t lived with my family in six years, but the word cwtch takes me right home. But more than that – when someone asks if I want a cwtch, they’re doing so because they know how much it means to me, and it makes me feel incredibly seen and understood.”

The word cwtch is intrinsically Welsh and evokes a sense of home (Credit: Photos by R A Kearton/Getty Images)

Dr Mercedes Durham, senior lecturer in sociolinguistics at Cardiff University, says that we use words like cwtch to distinguish ourselves as having a particular national identity. “Language has a lot to do with our identity and our culture. The word ‘cwtch’ is used by Welsh speakers and English-speaking Welsh people to indicate that they’re Welsh. It’s an emblem of being Welsh. In linguistics, we talk about the commodification words, and using them to sell an identity. People use this word to prove that they are Welsh. In gift shops, there are mugs and T-shirts that say ‘everyone can hug, only the Welsh can cwtch’. There are strong positive connotations for Welsh people.”

Interestingly, the word ‘cwtch’ is used both by Welsh-speaking people and English-speaking Welsh people. It’s even gaining a little traction in the English language, at least with people who have Welsh friends or family. Jonathan Dent, senior assistant editor of new words at the Oxford English Dictionary, has noticed an uptake in its usage.

‘Hug’ and ‘cuddle’ might be serviceable English equivalents, but neither of them will ever convey everything that ‘cwtch’ does

“It was named as Wales’ best-loved word in 2007 , has been used in wedding vows and is now flourishing in new contexts. A Twitter search shows the word in significant daily use on the platform, with people looking forward to a cwtch from their cariad [sweetheart], longing for a cwtch from anyone or offering one another virtual *cwtches*.”

He says there are other Welsh words we might use out of their traditional linguistic context, but we may not always get across the full nuance of their meaning. “The meanings of the Welsh words hiraeth (‘a sense of homesickness or nostalgia; longing; wistfulness’) and hwyl (‘a stirring feeling of emotional motivation and energy; a feeling which inspires passionate eloquence’) are often said to be impossible to capture in English, although we still have to try. In the case of cwtch, ‘hug’ and ‘cuddle’ might be serviceable English equivalents, but neither of them will ever convey everything that ‘cwtch’ does to someone who has grown up with the word.”

There is an enchanting profoundness to the word ‘cwtch’ that is not entirely translatable in English. And yet, it’s so lovely to add foreign words to our vocabulary, especially when we can’t quite land on the right English word. “One explanation for why we start using these words outside our own language is that there is a semantic gap in our own language or an experience we can’t quite articulate and then we discover a word for it in another language and we latch onto it,” said Dr Tim Lomas, professor in positive psychology at the University of East London and author of The Happiness Dictionary . “It’s a bit like the word ‘ hygge’ . Hygge is everywhere these days, and we use it to try and capture some of that enviable Nordic lifestyle. These words are more than words; they’re about a way of life and a state of mind. I don’t see why cwtch couldn’t have a similar movement to hygge. It would allow us to make a way of living around it, around cosiness and safety.”

We need cwtches more than ever

Could ‘cwtch’ be the new ‘hygge’? Could we use it to evoke and sell a sense of comfort and warmth? Could its popularity be an endorsement of intimacy and kindness? Eifion Griffiths, a third-generation Welsh textiles maker and owner of wool company Melin Tregwynt, thinks we very well could. “Like our interest in the concept of hygge, using the word cwtch is a contrast to a world of darkness and danger,” he said. “If you’re upset, you need a cwtch. If you’re wandering around happy, a cwtch doesn’t come into it. We need cwtches more than ever, I think, because it’s not a very comfortable world at the moment. You have to understand, when you give someone a cwtch you’re not coming on to someone. It’s a non-threatening hug, it’s not a danger or a threat. It’s a safe space, something that takes you back to your childhood, something that makes you feel warm – not just physically but emotionally.”

Eifion Griffiths: “[A cwtch is] a safe space… something that makes you feel warm – not just physically but emotionally” (Credit: Henn Photography/Getty Images)

Some days, there’s nothing I’d like more in this world than a cwtch from my sweet, doting grandmother. She was an exemplary giver of cwtches: warm, generous, affectionate without reserve. She was, despite leaving the Rhondda Valley as a teenager, idiosyncratically Welsh, and to show that, she’d use words like ‘cwtch’. It is a deeply significant word to anyone who was born in Wales, and truly anyone who loves someone Welsh. She’d be proud to think that more people had started using it, that more people were actively making one another feel safe and warm.

If you liked this story, sign up for the weekly bbc.com features newsletter called "If You Only Read 6 Things This Week". A handpicked selection of stories from BBC Travel, Capital, Culture, Earth and Future, delivered to your inbox every Friday.