Swedish ice-climbing instructor Markus Nyman warms up his students with an off-piste ski tour, snaking past pine trees so thick with powder that locals describe them as "snow ghosts". They're only a few minutes' slalom from the main chair lift that takes alpine adventurers to the top of the slopes of Duved, a 17th-Century village 640km north of Stockholm. But soon they're swapping skis for crampons and poles for pickaxes as they prepare to scale a frozen waterfall in the middle of the forest. 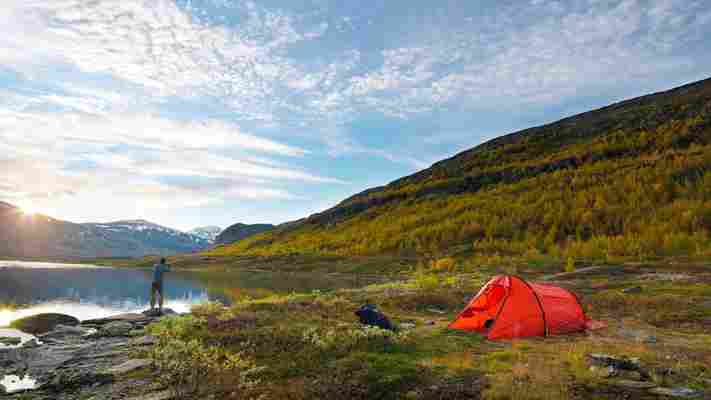 "The first feeling is so strange because you can walk on such slippery ice and have such a perfect grip," explained Nyman. Many of his clients, he says, are families who want to "combine skiing in the resort with trying something challenging and new". Beginners as young as 12 aim to reach the top of an 8m near-vertical wall of thick ice, using pickaxes to latch on to the frozen glaze and slowly haul themselves up the slippery crag. A top rope and harness keep them secure if they lose their hold. Star pupils can move on to an 18m icefall, if their muscles can take the strain while braving temperatures that can plummet to -20C. 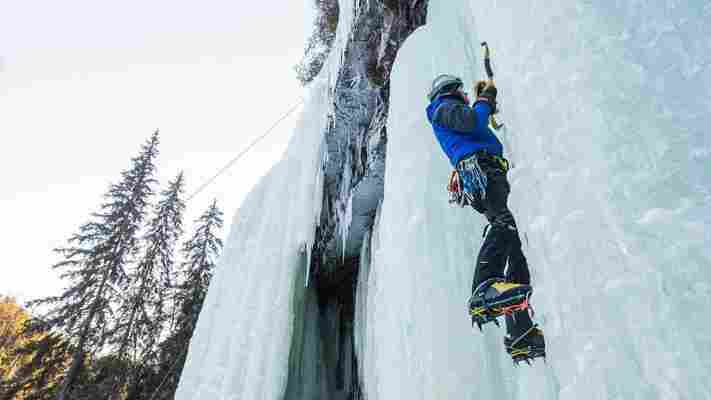 Demand for Nyman's services peaks during February and early March, as the days get longer and the ice hasn’t yet begun to melt. But the main reason he’s so busy is due to an annual Swedish tradition called sportlov , a nationwide school holiday designed to enable Swedish children to get outside and embrace winter sports. Schools across the country shut down for a week at a time, efficiently spread over a month to make sure resorts don’t get too crowded. And, with most Swedes entitled to at least five weeks' holiday a year, many parents take time off to join them. Single 20- and 30-somethings continue the habit into adulthood too, renting mountain cabins with friends.

Sportlov originated during World War Two when the government-run energy commission recommended shutting down schools for a week to save money on heating in the midst of a European coal shortage. In order to keep children occupied while their parents worked, state-funded outdoor activities were offered instead. "When everything went back to normal and the war was over, officials saw the good impact on the kids and came up with the idea that this was a good thing to keep," explained Emelie Thorngren, who organises children's activities for the Swedish Outdoor Association , the country's biggest non-profit outdoor sports organisation. "They wanted kids to do more physical activities and especially to make sure urban kids got to the mountains or the woods."

These days, some municipalities still lend out ice skates or toboggans or offer subsidised day trips to nature reserves during the week-long holiday. A range of non-profit groups also offers free or cheap outdoor experiences during sportlov and beyond, including the Swedish Outdoor Association, which consists of 300 local clubs. "We have activities from zero to 100 years old and we are never about competition," said Thorngren. "We welcome [everyone] to be in nature with us and take part in all the experiences and have all the good health benefits." 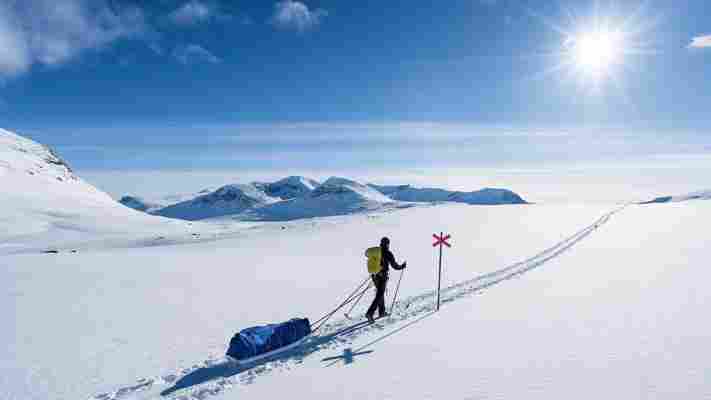 Sportlov is a week-long school holiday where Swedish children and their parents get outside and embrace winter sports (Credit: Markus Thomenius/Alamy)

This sporty take on spring break taps into a national love for nature that has long held a special place in the collective Swedish heart. Since medieval times, Swedes have embraced a concept called allemansrätten (the right to roam) pertaining to the country’s great outdoors.

A law allows anyone to ski, cycle, skate, swim and camp almost anywhere in Sweden

Formally enshrined in the Swedish constitution in the 1990s, this veritable national law of wanderlust means that Swedes and foreign visitors alike can ski, cycle, skate, swim, camp and – yes – even pick-axe up frozen waterfalls anywhere in Sweden that isn't on or near private property. And since 97% of the nation is uninhabited and very few trails or beaches are private, there's no shortage of beautiful spots to explore: two-thirds of the country is covered in forest; there are 30 national parks and more than 4,000 nature reserves (together covering an area greater than neighbouring Denmark); nearly 270,000 islands and thousands of kilometres of bike paths.

Embracing Sweden’s great outdoors has also been a growing trend amongst foreign tourists in recent years, with nature-based adventures and events among the top-five activities for global visitors in 2019, according to Visit Sweden, the country’s national tourism organisation. In the 10 months prior to the pandemic, around 60% of international overnight stays were to destinations outside Sweden’s capital. The global flight-shaming movement ­– started by Swedish activist Greta Thunberg –­ also boosted regional travel prior to Covid-19 restrictions, with a high demand for coastal and rural holidays from Swedes , Norwegians , Danes and Germans keen to explore the Swedish countryside by train, ferry or car, rather than travelling further afield.

" Allemansrätten is also about rights and obligations that mean that you should take responsibility and show consideration for landowners and other visitors," explained Thorngren. "We have this 'don't disturb, don't destroy' [mantra] and we teach all our kids that little saying... so you grow up with this, and you see the benefits."

The freedom to roam... this is our monument

At Mid Sweden University in Östersund, a small lakeside city 90 minutes east of Duved’s ski slopes and waterfalls, Lusine Margaryan – an assistant professor specialising in nature-based tourism originally from Armenia – has been researching the obsession with outdoor pursuits in her adopted country. She says Swedes’ passion for spending time in nature is strongly linked to the fact that "industrialisation happened in Scandinavia relatively late compared to most of mainland Europe." Once a nation of farmers, there were few urban areas in Sweden until the late 19th Century. Even today, there are no Swedish cities with more than one million people, and many Swedes still live in sparsely populated areas separated by vast tracts of wilderness. This has meant that "traditions relating to the rural lifestyle and living off the land" ended up sticking around. "Hunting and fishing, berry picking, collecting timber... these skills have remained in the Scandinavian countries," Margaryan explained.

You may also be interested in: • The Swedish chef who cooks solely with fire • Why Swedes don't speak to strangers • Sweden's single-diner restaurant

Even the country’s prime minister, Stefan Löfven, says he likes to clear his mind by chopping wood, collecting cloudberries or skipping stones in the lakes around Örnsköldsvik, his home town on Sweden’s northern coast. And the country's official tourism website proudly states : "Sweden has no Eiffel Towers. No Niagara Falls or Big Bens. Not even a little Sphinx. Sweden has something else – the freedom to roam. This is our monument."

It's also common for countryside cottages to be passed down through generations, says Margaryan, enabling many urban Swedes to spend holidays in more rural areas where their parents or grandparents grew up. Today, around one in five people own one, while more than half of Swedes have access to one via family or friends, according to Statistics Sweden .

In Sweden, country cottages are often passed down through generations, allowing people to spend time on the same land as their ancestors (Credit: Beáta Angyalosi/Alamy)

During the pandemic, the value of spending time outdoors to reduce stress and enhance mental wellbeing (rather than just to keep physically fit), has become a mantra of governments and public health charities around the world. But these kinds of discussions date back centuries in Scandinavia and provide further context for Swedes’ love of nature.

A concept called friluftsliv , which translates as "open-air living", was popularised across the region in the 1850s, after the Norwegian playwright and poet Henrik Ibsen advocated spending time in remote locations as a form of relaxation. "It's kind of very close to what we mean nowadays by mindfulness," Margaryan explained. "So it is a search for a deeper connection to the landscape and being in nature and going into this very self-reflexive, meditative mood."

Nyman agrees that his passion for ice-climbing (called isklättring in Swedish) is as much about keeping his mental health strong as it is about pushing his body's physical limits. "You can't – even if you want to – think of something else like your day-to-day troubles, because you really have to focus," he said. "And [from Duved] you can see down to the valley; you can see the mountains in the distance… really what most people think about when they get to the top is 'wow!'"

The concept of "open-air living" has long been popular in Sweden (Credit: Johner Images/Getty Images)

For Margaryan, who grew up in Armenia’s capital Jerevan, moving to Sweden has made it much easier to indulge her own lifelong passion for spending time outdoors. "It's very ingrained in the local culture... and it's literally no effort to find some nature, because even the cities, they always have forests, big parks."

However, she notes she’s the only immigrant in her local running club and believes improving access to the outdoors for Sweden’s increasingly diverse population is an important challenge. One in five people living in Sweden was born abroad or have parents from other countries, but qualitative research by Mid Sweden University indicates that many are less engaged with annual traditions like sportlovor concepts such as allemansrätten and friluftsliv . This stems from a range of factors, like limited information about outdoor activities in languages other than Swedish, immigrants tending to have less disposable income for sports equipment, unfamiliarity with colder climates and cultural reasons that can affect their relationship with nature.

"If [people] didn't grow up with the idea that they should go into the forest… the forest is perceived as a dangerous place rather than where someone could go for a walk alone in the evening," said Margaryan.

Because Sweden is a large and very sparsely populated nation, there are vast tracts of wilderness (Credit: Johner Images/Getty Images)

But efforts are underway to better integrate immigrants and other vulnerable groups into Sweden’s outdoor lifestyle and improve their access to nature. Recent initiatives include Fritidsbanken (the leisure bank), a nationwide non-profit organisation which works like a public library, loaning out donated sports equipment for up to 14 days. The Hej Främling! ("Hey Stranger!) group puts migrants and locals in touch so they can do free outdoor activities like hiking or running together. Mid University Sweden has surveyed thousands of sports clubs to try and identify areas of improvement, and it’s involved in a new 56m kronor (£4.7m) sustainable tourism project that will, over the next eight years, test fresh ways to make sports equipment and transportation more accessible, while also protecting the environment. The Swedish Outdoor Association – which has long lobbied decision makers and politicians to increase funding to enable even greater public participation in outdoor activities – is among those involved in the programme.

And that, she hopes, will enable children in Sweden to keep enjoying the outdoors for generations to come, whether that’s scaling a frozen waterfall during sportlov, picking berries like the prime minister or just enjoying the benefits of a simple stroll around a city lake.

Slowcomotion is a BBC Travel series that celebrates slow, self-propelled travel and invites readers to get outside and reconnect with the world in a safe and sustainable way.