There is a competitive nature that courses through Malta so raw and unbridled that it’s written into the skyline of its capital, Valletta, and permeates across all walks of life on the archipelago. 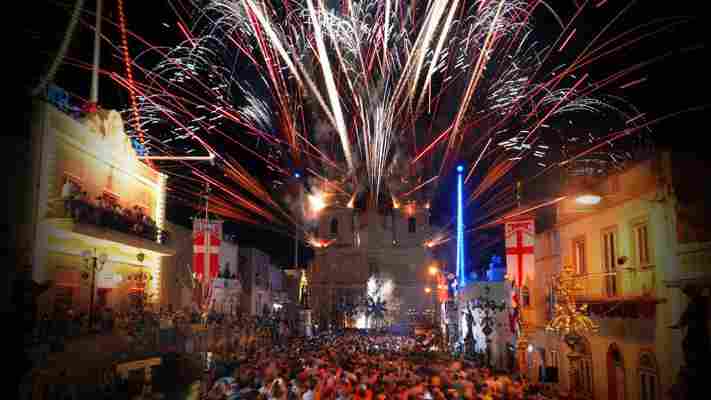 I’m talking about pika – a Maltese word that roughly means ‘a neighbourly rivalry’, but is one of those terms that feels like a fool’s errand when foreigners try to interpret it.

Pika is, as Professor George Cassar, who teaches heritage and cultural tourism at the University of Malta explained, what drives Maltese to outdo their immediate rivals. Usually, this rivalry involves followers of different saints within the same town – a ‘this-town-isn’t-big-enough-for-both-of-us’ attitude – and ranges from benign sportsmanship to premeditated aggression. 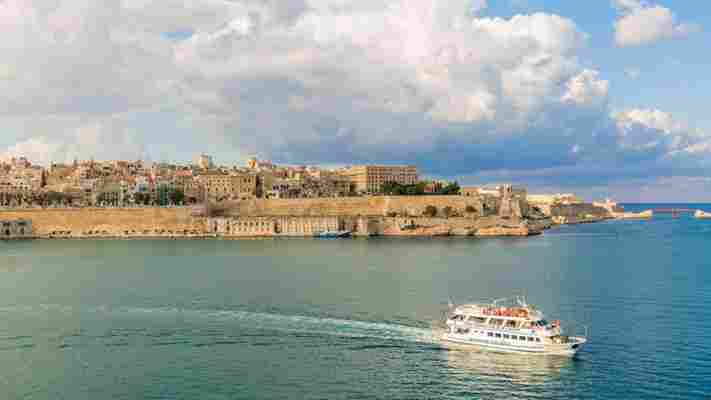 Pika, a Maltese word that means ‘a neighbourly rivalry’, can be seen all across the islands, including in the Valletta skyline (Credit: Hemis/Alamy)

You may also be interested in: • South Africa’s unique way to protest • The Indian town with major attitude • Is Singapore suffering from FOMO?

“Pika is what drove the Maltese in 1958 to tear down and rebuild the Carmelite Basilica that today defines Valletta’s horizon with a 42m-high dome, just to overshadow the Anglican Cathedral next door,” he said.

Pika is also what brought about a man getting hit over the head with a flowerpot , according to the Times of Malta, during a festival in August last year. Meanwhile, just less than two weeks later, two parishes exchanged sacrilegious insults about their rivals’ Virgin Mary statue – ‘Ours is the most beautiful statue. Yours is the ugliest in Malta’ ; also an example of pika.

That these last two events took place so close in time is no coincidence. Every year, Malta’s festa season, when villages celebrate their patron saints by throwing big feasts, peaks between June and September. At this time, pika summons the islands’ hot-blooded Mediterranean spirit to the fore, as parishes compete in a paradoxically sacrilegious celebration of the sacred. Rivalries have become so intense that festas have had to be partially cancelled, the most recent in 2004 , due to the threat of violence. 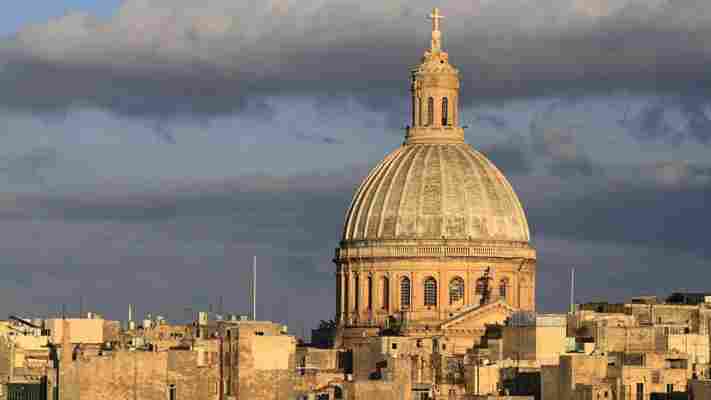 In 1958, pika drove the Maltese to tear down the Carmelite Basilica and rebuild it to feature a 42m-high dome (Credit: Zoonar GmbH/Alamy)

Year after year, followers of respective patron saints attempt to outspend and outdo their neighbouring parish in a contentious crusade for showmanship that seems truly fit for the descendants of the Knights Hospitaller , the medieval sect of Catholic warriors from Jerusalem that ruled Malta for about 300 years from 1530. To this day, Maltese festa pageantry, artefacts and ornaments take cues from the Baroque style that defined the 17th- and 18th-Century architecture of the Order of St John, such as the hand-held carriage that transports the statue of the saint to the festa’s main stage, and the hand-carved wooden centrepiece for the Sunday feast. In recent years, festas have included competing theatre companies and a new record for hoisting 711 flags in a village .

“Various parts of Malta are hotter on the pika register than others,” Cassar had informed me. So I visited one of these towns last November hoping to get a better grasp on the concept. Located in central Malta, the town of Qormi hosts an intense rivalry between followers of St George and St Sebastian that has built up a reputation over the past years, and I went to learn why.

Mario Cardona, a St Sebastian supporter, anthropologist and professor at the Malta College of Arts, Science and Technology, picked me up at my hotel in northern Malta for the 30-minute drive to Qormi, about halfway across the island. (When there is no traffic, Malta can feel incredibly small.)

The following of saints in Malta dates back to the Middle Ages, including the cult of St George in Qormi, Cardona told me as we drove. But St Sebastian wasn't venerated here until 1813, when the plague hit Malta and villagers vowed to build a statue of the patron saint of epidemics in exchange for delivery from the outbreak.

We pulled up to a fork in the road in the centre of a town painted the colour of desert sand, redolent to this traveller of the rocks that compose Jerusalem, and certainly closer in appearance to cities on the southern side of the Mediterranean. After all, the Arabs left a mark on Malta that lingers until today via the island’s language, which is by far more Arabic in origin than Italian. Yet Malta is still very much a European nation, one that has long remained loyal to the Roman Catholic Church.

“Pika is Mediterranean,” said Cassar, explaining that Spain and Italy also are wont to display colourful festival rivalries. “But the closest example to our festa is the Sicilian type.” For example, like Maltese celebrations, Sicilian festas carry the statue of the patron saint along the streets of the town – and Sicilians are also very partial to over-the-top firework displays.

Yet, the rivalries exhibited on Malta have an additional spark of vitriol that is something uniquely Maltese.

The following of saints in Malta dates back to the Middle Ages (Credit: Hemis/Alamy)

We arrived at a building whose beige stone façade was adorned with hundreds of large light bulbs and a draped green banner – the colour favoured by followers of St Sebastian in Qormi.

Beneath the banner, Cardona’s fellow St Sebastian supporters were waiting for me, including the president of their association, known in Malta as a ‘band club’.

Band clubs are volunteer organisations that are found throughout islands. As their name suggests, they are gathering halls for marching bands – a legacy of British military bands – but they’re also social clubs, equipped with bars, pool halls and even a radio station, as well as informal religious links to the church with their own chaplain and chapel.

Band clubs in Malta are also the epicentre of the most competitive forms of pika. Just by visiting the St Sebastian band club, I joked that they could use this interview as material for next year’s festa, which aroused a wide-eyed expression in one man, who appeared to already be cooking up a dubious plan how to outshine the neighbouring St George band club the following summer.

Last year, St Sebastian’s festa was predictably extravagant. In the week-long celebrations, according Cardona, their band club spent €100,000 on sumptuous feasts, gigantic fireworks displays and imported entertainment, including a special appearance by UK X Factor winner Ben Haenow in Qormi – a town of about 16,000 people.

“Pika is the need to keep making things bigger in order to outdo your rival,” Cardona told me. “It’s having to satisfy a need to constantly prove to yourself, to your kin and to outsiders. Rather than going for what is beautiful and entertaining, we go for what would be a first in our village.”

The size of Malta, the EU’s smallest nation with a population of around 430,000, may offer the best clue as to why rivalries here are so intense. “Geographical smallness intensifies rivalry and pika, as people can easily monitor what their neighbours are doing, thinking and saying,” Cassar said. “The competitive instinct in human beings does the rest.”

Band clubs are at the heart of Maltese festas, as well as the epicenter of the most competitive forms of pika (Credit: Justin Calderon)

On the second floor of the St Sebastian band club, in a room resembling a hall in an Italian museum that included an €80,000 crystal chandelier and a painting of Grand Master Manuel Pinto da Fonseca from the Order of St John, Cardona and three other men continued to mull over the current state of pika on the islands.

“When the festa season comes, everyone likes to spend as lavishly as possible,” chimed Charles Saliba, secretary of the St Sebastian band club. In some ways, it’s bigger than Christmas; the village festas draw back the Maltese diaspora and are a time when old friends reunite.

“How much influence does the church have in your affairs today?” I probed while examining a long timeline of portraits of Catholic chaplains hung on the wall behind Cardona.

“The church takes the charge of the internal sacred part of the feast, and the band club organises its own feast. Sometimes the church priest will get involved if he doesn't like some lyrics we have written,” giggled Charles Spiteri, the band club’s president, alluding to the church’s attempts to censor the more profane material that rival parishes tend to publish, including songs, posters and banners about their saint.

“My personal opinion,” said the fourth man, John Camilleri, “and maybe they don't agree with me; I don't care much.” They all laughed. “I blame the church for a big part of the pika in Malta.”

“In Maltese festas, favouritism is exhibited by priests supporting one saint over another, who elect their favoured parish to hold the grandest feast while their rivals are forced to hold a less-decorated ‘secondary feast’,” Camilleri explained.

“Some priests even count lightbulbs in the secondary feast to see that they didn't have as many as the primary feast. Secondary feasts cannot light up the dome of a church, either,” he said. “This creates a lot of pika.”

John Camilleri: “I blame the church for a big part of the pika in Malta” (Credit: parkerphotography/Alamy)

In 2002, the Archdiocese of Malta tried to reign in the unruliness of Maltese festas, fearing that they were damaging church decorum, but the attempt ultimately fell flat. Efforts to set up a censorship board to eliminate all provocative materials from the festas and other measures failed, and the church official that led the campaign became “rather disliked” on the islands, Cassar explained diplomatically.

This is nothing new in Malta. “No bishop has ever really managed to control Maltese pika. It’s always the one against the many – and without its faithful the church is nothing,” Cassar affirmed.

It’s having to satisfy a need to constantly prove to yourself, to your kin and to outsiders

Yet, although festa expense and showmanship seems to be ever increasing, the level of decorum seems to have improved in Malta in recent decades, with or without the exhortations of the church. Camilleri remembers much more vulgar festas in his youth. “On one occasion, they painted chickens red (the colour of their band club) and threw them on their opponents to say that they were chickens,” he chuckled. “On another occasion, when a march of a rival band was passing by, someone threw urine over the people from the balcony.”

Thank the saints those days are long gone.

If you liked this story, sign up for the weekly bbc.com features newsletter called "If You Only Read 6 Things This Week". A handpicked selection of stories from BBC Future, Culture, Capital and Travel, delivered to your inbox every Friday.