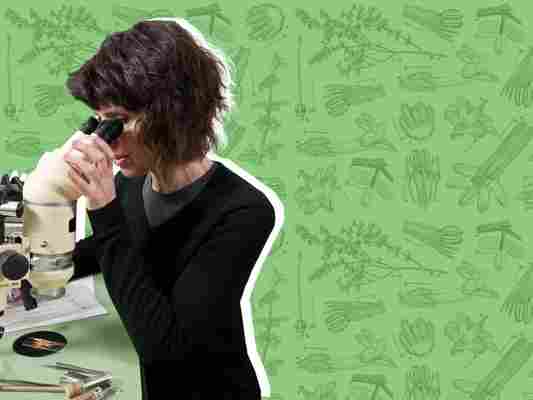 Alice Tangerini’s botanical illustrations all begin the same way: with a seemingly simple line drawing, in which she explores a plant’s features—leaves, seed, stem, perhaps a flower or two. Next, she uses a microscope to investigate her specimen’s tiny hairs and veins, recreating their likeness in delicate lines with the pressure-sensitive pen of an architect or engineer drafter. Tangerini has adopted the tools and the vision of both the artist and scientist for her work, which is, as she describes it, “art in the service of science.”

Tangerini is the first and only botanical illustrator at the Smithsonian’s National Museum of Natural History, where she has been putting her stamp on plant science for 46 years. Over the course of her career, Tangerini has created hundreds of illustrations from over 1,000 different plant species from all over the world. Her artwork has appeared in books , peer-reviewed science journalsand museum exhibits . Prominent botanist Warren H. Wagner calls Tangerini “ irreplaceable ” in the field of botanical illustration.

Though some universities now offer degrees in scientific illustration—like the University of Iowa’s Biological and Pre-medical Illustration program and the University of Chicago’s Medical Illustration program—no such program existed when Tangineri embarked on this field in the late 1960s. Her entrance into scientific illustration relied on a bit of luck (and a lot of skill), resembling more of a teacher and apprentice relationship rather than today’s formal college route.

“I’d always been interested in drawing, even from childhood,” recalls Tangerini. “I grew up in a neighborhood where even the neighbors knew I was the ‘girl who liked to draw.’” One summer in between college semesters at her junior college in Kensington, Maryland, Tangerini was looking for a summer job. It was one of these neighbors who suggested that Tangerini talk to Lyman Smith, a botanist at the Smithsonian’s National Herbarium who happened to live in the neighborhood and to be looking to hire an illustrator.

When she went to introduce herself to Smith for the first time, she brought along a high school art portfolio of horse and dog drawings. The closest thing to a plant that Tangerini had drawn up to that point was the grass under the horses’ hooves. “He raised his eyebrows and said ‘I’ll just give you a try,’” she recalls now. “And that was exactly how it started.”

The next week Tangerini met Lyman at the museum for a test run. Lyman set out a dried plant specimen, a piece of bristle board, a pencil, and a bottle of ink and with a pen. Then he left. Hours later, he returned to see what Tangerini had done. “I drew a dead plant that looked like a dead plant. But exactly like that dead plant,” she says. He told her that next time she should unfold the leaves. And that was her first lesson.

She continued to work for Lyman on the weekends and during the summers, and that became her training as a botanical illustrator.

Decades after beginning as a botanical illustrator at the Smithsonian in 1972, Tangerini still draws dead plant specimens from all over the world, some over 200 years old. But now she knows how to imbue them with new life. Her lines, careful and full of intention, smoothly flow from thick to fine, creating a sense of animation. And though one convention in botanical illustration is to add a light source from the upper left of the drawing, Tangerini’s style of using heavy line shading gives plants the appearance of emitting a light of their own.

Tangerini does not see herself as a fine artist, even though she graduated with a fine arts degree from Virginia Commonwealth University. “Scientific illustration is usually defined by the audience. You’re drawing for a scientific audience,” she explains. “I think of fine arts as that in which you work for yourself. You are deciding yourself ‘what am I doing, what do I want to present to an audience that I determine.’”

The categorical divide between aesthetic (plant portraits) and instructional (plant illustrations) representation is long-held. Instructional plant illustration dates back to ancient and medieval Herbals, which were books used by healers and apothecaries that contained information about plants’ medicinal properties and described how the plants should be prepared for medicinal use. Accompanying the text were plant illustrations, which needed to be instructional enough for a reader to identify the plant in nature, including an accurate rendering of the plant’s proportions, characteristics of the plant, and the colors of the foliage and any flowers or fruit. For healers and herbalists, the stakes were high; the wrong plant or preparation could result in death.

Tangerini follows closely in this ancient tradition, with one exception: color does not feature prominently in her oeuvre. Since most of Tangerini’s models are dried specimens, they don’t have much color when she receives them. “[Color] is not even essentialhat is not a taxonomic denominator, it does not separate species,” she explains. Someone’s interpretation of a color is subjective, so the plant characteristics that could be recognized by botanists in any part of the world are those that are taxonomically significant: plant morphology, structure, and the internal parts of the plant.

Another distinction is that, for ancient and medieval illustrators, modern taxonomy did not yet exist as a standardized system of identification. It wasn’t until the 18th and 19th century—when naturalist and eugenicist Ernst Haeckel began popularizing the field of scientific illustration through hundreds of pubished artworks of microscopic plants and animals—that the type of botanical precision that Tangerini looks for became an integral part of the craft.

Historians of science like Ann Shteir , Barbara Gates and Sally Kohlstedt have shown that botanical illustration during this period offered women an alternative pathway into science. Either as independent illustrators or unrecognized illustrators for their male relatives, hundreds of women illustrators were central to taking the newly developed taxonomic language of male botanists and transferring it to accurate visual representation These women brought scientific accuracy to the botanical: Though many have faded into obscurity, their work established the foundation for modern botanical illustration. 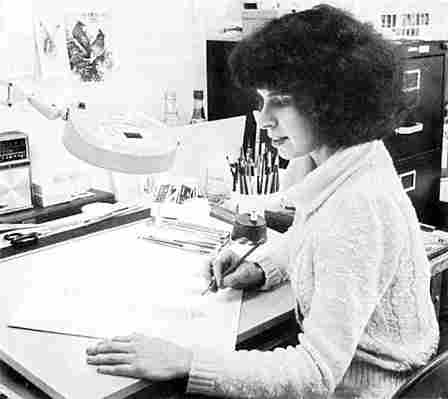 The aim for scientific accuracy at the direction of a scientist does not, however, mean that all illustrations look the same or that illustrators do not infuse imagination and creativity into their work. Tangerini is, by all definitions of the word, an artist. “We have control over media and our implements,” she points out. “I consider every drawing to be a challenge because every time I put pen to paper or my stylus to the screen I have to determine where I’m putting my lines and my shadows or dots or colors to better show what the scientist has given me.”

When Tangerini began illustrating, scientific illustrators were so small in number that an industry simply didn’t exist to supply them with specialized tools. (Her field remains small; funding constraints mean many museums and botanical gardens typically employ just one or two illustrators.) As a result, it was customary to use the tools of architects, engineering drafters and calligraphers.

Similarly, today’s illustrators have adopted tools from the field of graphic design, opting for stylus and graphics tablets over pen and paper, and using creative software like Adobe Photoshop. “Even if you can draw or paint, you still need to be able to use all these programs,” says Autumn von Plinsky, a former illustrator for the New York Botanical Garden. “It’s one of those things that broadens your career and project capabilities by getting to know them, the design and illustrator aspect.”

Yet Tangerini still prefers her vintage pens and pencils with paper. After so many years, she says, her hands are just used to doing it that way. But there’s another reason she prefers these implements: preserving the long history of her craft. These vintage tools, flexible nips and pens, allow her to achieve the style in which she wanted to follow when she started: engraving. “I still look at old engravings to see the line work — it’s beautiful,” she says. She has acquired many of her tools from other illustrators and can’t be found in the market anymore. “I acquire their tools because to me it’s like a history. A little history of drawing that is slowly vanishing.”

On top of her illustrating duties, Tangerini now curates the botanical art collection in the NMNH and the Smithsonian’s Catalog of Botanical Illustrations. But what she loves most about her work is still the process of reconstructing a dried specimen on paper. “Figuring out in my head how I represent this dried dead plant in a way that I feel will look aesthetically beautiful on a page that I can design myself ... it’s very rewarding,” she says. Sometimes in this process, she finds some tiny detail that even the botanist couldn’t see. “I’m putting it under the microscope to draw it. I have to really look at it, because I have to do an interpretation of something that is dried and try to make it as though it is living.”

It is through this act of reanimation—in the noticing of undiscovered details and determining the best ways to represent them on paper—that Tangerini finds the lyrical in the scientific. As she puts it, “that in itself is an expression of myself.”