(CNN) As Tropical Storm Henri moved north through the Atlantic on Friday night, hurricane warnings were posted from New York's Long Island to Rhode Island and a tropical storm warning was issued for New York City.

Officials in those states told residents to take precautions.

"With the current forecasted track of Henri, we can expect heavy rainfall and high winds, with the potential for a significant amount of coastal flooding and urban flooding across Connecticut," Gov. Ned Lamont said in a news release. "Right now, it's a good idea for everyone to be prepared and expect to shelter in place by Sunday afternoon through at least Monday morning."

Henri will be a hurricane by Saturday and make a rare landfall on New York's Long Island or southern New England by Sunday, according to the National Hurricane Center (NHC).

Henri now has sustained winds of 70 mph, according to the 11 p.m. Friday update from the NHC . "Although steady to rapid weakening is forecast while Henri moves over cooler waters south of Long Island and New England, it will likely still be at or very near hurricane intensity when it reaches the coast," the center said Friday afternoon in its discussion about the storm . A hurricane warning means that hurricane conditions are expected within the area. Forecasters typically issue the warning 36 hours before the predicted first occurrence of tropical storm-force winds. A tropical storm warning is also in effect from Watch Hill, Rhode Island, to Woods Hole, Massachusetts -- including Block Island and Martha's Vineyard, NHC said its latest update. {"@context": "http://schema.org","@type": "ImageObject","url": "//cdn.cnn.com/cnnnext/dam/assets/210820082223-weather-tropical-storm-henri-satellite-08202021-large-169.jpg"} The last time a hurricane made landfall in this region was Hurricane Bob in 1991. But hurricanes have made significant impacts since then. Irene and Sandy brought devastating conditions even though they did not make landfall as a hurricane. A direct landfall as a hurricane means the worst winds will make it onshore. var pymParent = new pym.Parent('storm-tracker', 'https://www.cnn.com/interactive/storm-tracker/embed.html', {}); A tropical storm warning is in effect for Port Jefferson Harbor to west of New Haven, Connecticut, and for the south shore of Long Island from west of Fire Island Inlet to East Rockaway Inlet. The warning means tropical storm conditions are expected somewhere within the area within 36 hours. {"@context": "http://schema.org","@type": "ImageObject","url": "//cdn.cnn.com/cnnnext/dam/assets/210820082232-weather-tropical-storm-henri-prob-of-ts-force-winds-08202021-large-169.jpg"} New York City Emergency Management issued a travel advisory for the city until further notice. All beaches in the city will close Sunday and Monday, according to city officials. Swimming and wading will not be permitted during those days. Wind shear -- the changing of wind speed and direction with height -- has been keeping Henri from strengthening the past few days. That shear is expected to end Friday night, allowing Henri to reach hurricane status by Saturday. As the storm makes landfall, damaging winds and storm surges are the most significant threats. "Keep in mind tides will be astronomically high this weekend along both coasts," according to National Weather Service forecasters in Boston. {"@context": "http://schema.org","@type": "ImageObject","url": "//cdn.cnn.com/cnnnext/dam/assets/210820082229-weather-tropical-storm-henri-winds-category-08202021-large-169.jpg"} The full moon Sunday means higher high tides. Any storm surge on top of already higher tides could trigger enhanced coastal flooding. "Track will ultimately tell us which coastline is most at risk (east coast vs south coast) or if both will be in play," the Boston NWS said Thursday. A storm surge of 3 to 5 feet has been forecast from Watch Hill, Rhode Island, to Chatham, Massachusetts; a surge of 2 to 4 feet is expected for the coastline of Connecticut and New York, including the north shore of Long Island, and 1 to 3 feet is forecast along the New Jersey Coast down to Cape May. "The deepest water will occur along the immediate coast in areas of onshore winds, where the surge will be accompanied by large and dangerous waves," the hurricane center said. A storm surge warning has also been issued for the south shore of Long Island from Mastic Beach to Montauk Point, the north shore of Long Island from Oyster Bay to Montauk Point, from Greenwich, Connecticut, to Chatham, Massachusetts -- including Nantucket, Martha's Vineyard and Block Island. A storm surge warning means there is a danger of life-threatening inundation from rising water moving inland from the coastline during the next 36 hours. Heavy rainfall will also be a threat during the day Sunday and into the beginning of next week. Henri is forecast to produce rain of 3 to 6 inches over Long Island and New England, with isolated maximum totals near 10 inches. "Generally by the time storms make it to New England, they are getting picked up by the jet stream and are moving very quickly," says CNN meteorologist Brandon Miller. "It will be very rare for a storm to move this slowly over the Northeast." That means that storm surge, dangerous surf, coastal erosion and heavy rain will continue to batter New England for days instead of hours. New England prepares for the storm In Massachusetts, Gov. Charlie Baker activated the state's National Guard Friday, allowing up to 1,000 guardsman to help with high water rescue, debris clearing and public safety related to Henri, he announced during a news conference. Baker anticipates anywhere between 100,000 to 300,000 power outages could happen and said utility workers are being staged at Camp Edwards in advance of the storm. Baker urged people planning to travel to Cape Code or islands this weekend to delay their trips, leave on Saturday, or plan to extend their stay until at least Monday or Tuesday because of Henri. He asked Massachusetts residents to stay home Saturday night and remain there through Sunday, as Henri is expected to make potential landfall. Rhode Island Gov. Dan McKee urged residents to prepare for the storm and announced he has signed an emergency declaration to unlock federal resources to support storm response. The governor urged residents to use caution along shoreline areas due to anticipated rip currents and high surf. "Rhode Island has often experienced needless tragedy during storms when wave watchers and anglers who have climbed onto rocks near the shore get hit by waves and quickly swept out to deep water and drowned," he said. State beaches and parks will be open Saturday, according to the governor, but closed Sunday and likely Monday, depending on storm damage and required clean up. Lamont, the Connecticut governor, said he is requesting a presidential pre-landfall emergency declaration and is issuing a declaration of civil preparedness emergency to enable the state to take any actions necessary. 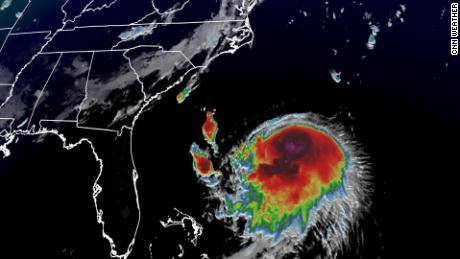